How Fixed Income Can Address the Challenges of Emerging Markets 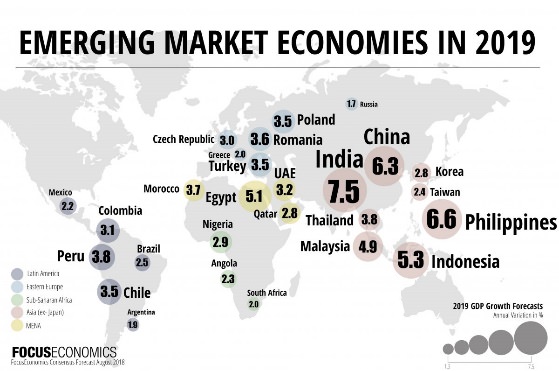 Governments in emerging markets only possess around half the debt compared to their more developed peers, and their economies are growing twice as fast, as opposed to the plateauing effect which occurs when countries reach a certain level of prosperity. Central banks in emerging markets also strive to keep inflation in check with investor-friendly monetary policies.

However, despite these strengths, emerging markets have a bit of an issue. When the grim specter of risk rears its ugly face, emerging market assets are often among the first to be sold off.

"As soon as the dollar goes up investors in EM start shuddering and they start selling," said Jan Dehn. Global Head of Research at specialist emerging markets investment manager Ashmore. "When you make 15% [in US dollars] in one year in local bonds you're running ahead of schedule. There's further to run, though future returns will be lower."

This has been a difficult year for emerging markets for precisely the reasons already discussed. Emerging market stocks are down 10.5 percent on average and bonds are down 7.7 percent. With 26 emerging market currencies also being down 5 percent for the year, 2018 marks the worst performance of any major global fixed income class.

This is despite generally strong growth in the US economy and relatively contained global inflation. However, the slump in emerging markets could present a great opportunity for those with the willingness to roll the dice a little. It takes strength to smell the blood in the water and start buying when all around are selling, but those who do have the potential to bring home some significant returns.

When it comes to emerging markets, you need to be aggressive to get more compensation for your risk. Look for value, such as with well-priced domestic high-yield bonds which prevent you from not getting paid for a still present risk. The pay-out on bonds from emerging markets such as Brazil and Mexico in Latin America, and India and Indonesia in Asia, can also yield results for those risk-seekers looking to expend aggressively. The Indonesian 10-year sovereign bond yields 8.24 percent and Brazilian 10-year bonds pay 11.6 percent, allowing for fair compensation when weighted against the risk.

"The emerging markets are more robust now," said Co-Head of Fixed-Income Strategy and Managing Director for the Wells Fargo Investment Institute, George Rusnak. "More countries and companies issue debt in their own currency and they have better access to markets across the liquidity curve. It makes them better able to withstand challenging times."

However, while there is promise in emerging markets such as those in Brazil and Indonesia, turmoil in others aren't helping with the trust issue.

In Argentina, the Peso has lost nearly 50 percent of its value in 2018, and over in Turkey, the Lira declined by nearly 40 percent. Compounding the issue, spreads on the two countries' debt have widened significantly. Combine this with geopolitical issues such as the election of a far-right president in Brazil and the land reform and recession problems plaguing South Africa, and there's plenty to be concerned about.

Another element of geopolitics that could have a significant impact on emerging markets is Donald Trump's ongoing tariff war with China. Following the imposition of tariffs on $200 billion of Chinese imports and the reciprocal $60 billion imposed by China, the potential for a full-blown trade war now exists, which could seriously hurt growth in emerging markets.

Emerging markets provide risk and opportunity for those willing to take a chance on them, but we'll have to wait and see what the unfolding geopolitical landscape has in store.

"For both individual and institutional investors, the market for EM bonds has become large and diverse, with assets in ETFs and mutual funds up by a factor of five to roughly $85 billion since the financial crisis," writes Andrew Osterland for CNBC. "It encompasses both government and corporate bonds denominated in local and 'hard' currencies (typically U.S. dollars or euros). JPMorgan, the market leader in EM bond indexing, reportedly plans to expand its index line-up to include blends of these different types of bonds. Fund managers believe it could further expand liquidity and interest in the market."

The challenge and reward of emerging market investment is set to be a hot topic at Fixed Income Leaders Summit: Emerging Markets 2019, taking place in March at The Ritz-Carlton Westchester, White Plains, NY